I’ve done it. Finally. I wrote a while ago about my desire to make my own advent calendar – something that was unique to our family, and reusable for years to come. I came up with a plan that I was satisfied – but not thrilled – with. I embroidered 25 numbers. I started assembly. And by mid-December recognised that this was not the year I was going to finish my advent calendar. Maybe next festive season though. That was four years ago.

Two house moves and a job change later, I’ve finally finished it. Which is ridiculous. But it also gave me the chance to find a pattern that I wasn’t just content with, but one that I really liked. That I got excited about (as much as you can get excited about sewing patterns – which is quite a lot it turns out).  The basic pattern is from ‘Homemade Gifts Vintage Style’ by Sarah Moore, which I picked up from a charity shop and peruse semi-regularly for ideas. 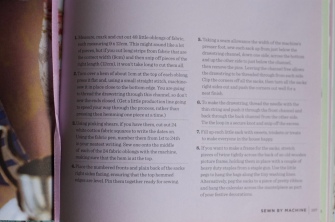 I like this pattern for its flexibility – the sacks could be hung together in a frame (as in the book), or scattered around the house, or in a christmas tree.

I like things to be multi-purpose and these sacks have enough room for a few festive items:

Inspired by this thanksgiving blog post, I also plan to cut out 25 cards so we can write one thing that we are grateful for each day to put into the sack. I like the idea that we don’t just take something out, but we also put something back each day. It seems to be a good habit for this often consumeristic season. And it’ll be heartening to look back at them all on Christmas Day.

1. Embroidered the numbers: I found a font that I liked, typed out 0-9 (which gives you everything you need for numbers 1-25) in the size I wanted and printed it out. I then traced the numbers onto red fabric using a fabric pen, and embroidered them in white embroidery thread.

2. Planned the calendar: Having picked my fabrics, I planned out the whole calendar. That way I knew how many sacks to cut out from each pattern, and could confident that I wasn’t going to accidentally end up with three checked sacks in a row.

The next steps use the pattern from the book, with some tweaks/tips I discovered along the way

3. Cut out 50 rectangles (2 for each sack): The book uses the measurements of 9 by 12 cm. To make this a bit easier, I cut out a couple of templates on baking paper. Planning out the calendar meant I knew how many to do from each fabric.

4. Hemmed the top of each rectangle: This is for the channel to put the twine (or ribbon) through to hang the sacks. The instructions suggest a hem of 1cm. I did this for most but, particularly for the check and striped patterns, I prioritised making sure the hem worked for the fabric over making it exact. I figured I’d rather they looked good than were absolutely identical (what’s a couple of millimetres amongst friends). I used a straight stitch, and left the ends open for the twine to be pulled through.

Worried that I wouldn’t get this finished by the 1st December (mindful of the years between starting this project and now) I initially did these roughly in order, so I could hang the first week on the 1st of December and still be making the rest. This meant swapping thread colours, so I loaded four bobbins with my four threads to make this a bit quicker. In the end I did have enough time so I was able to hem all the rectangles for each pattern in one go, which was a bit of a time saver.

5. Cut out the numbers using pinking shears: I realised I preferred to do this quickly than to be exact. I just did this roughly, using the squares on my cutting board as a guide. When I saw that number 1 was smaller than others, I just added a square of navy behind it to make up for it.

6. Sewed each number onto a rectangle: Referring to my plan ensured I was sewing the right number on to the right fabric. I also added a strip of ribbon to the bottom of a few of the squares because, you know, pretty.

7. Assembled the sacks: I put the numbered front and a back in the same fabric right sides together, making sure that the hemmed tops were level with each other and weren’t sewn closed during assembly. The book uses a seam allowance the width of the machine’s presser foot and suggests cutting the corners from the bottom of the sacks to make it easier to get neat edges.

8. Inserted the drawstring: The instructions suggest ribbon; I went for twine for a more rustic feel. Plus I had loads of short lengths of twine ready for a new project having been used for Christmas present wrapping in the past (instead of sellotape, which just ends up in the bin). The pattern adds the drawstring after turning the sacks right sides out, but I found it easier to do it when they were still inside out. This meant I could just pull the twine straight through with a needle, rather than having to navigate curves.

9. Got festive: Added the chocolate and the ‘Do’s’ and hung the sacks around the flat. I anticipate that when the tree goes up, a few will migrate to there, maybe with number 25 at the top, full of festive promise.

2 thoughts on “Make your own // advent calendar”

I write about how sustainable choices, powerful words and considered creativity can all knit together to form a life well lived.