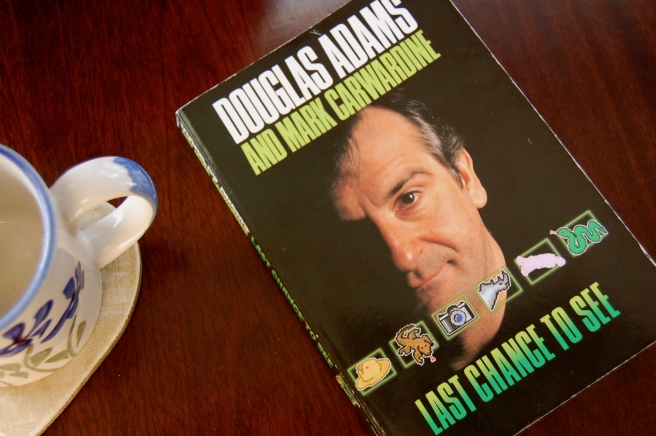 As a longtime devotee of The Hitchhiker’s Guide to The Galaxy I would’ve picked up Douglas Adams and Mark Carwardine’s ‘Last Chance to See’ regardless of the subject matter. The fact that the book details their attempts to see some of the most endangered species of the 1980s just meant that I gained an extra level of enjoyment, beyond their hilarious retelling of jetlag, excessive aftershave purchases and empathy with chickens (I’m not sure fellow passengers on public transport were as blessed by my stifled laughter and shaking shoulders).

Whilst the book was a great read, it was also sobering. The authors’ goal was to see these species – komodo dragons, New Zealand kakapos, Northern white rhinos, Yangtze river dolphins, Madagascan aye-aye, Mountain gorillas, Rodrigues fruit bat – before they disappear forever. Reading it 25 years later, it would be lovely to think that we’d got the message that things need to change. Sadly it is not so.

The International Union for Conservation of Nature (IUCN) ranks the current conservation status of species through their Red List of Threatened Species. A quick look at this shows things have not greatly improved for our last chance species. The aye-aye and Mountain gorillas remain endangered, whilst the Rodrigues fruit bat and the kakapo are critically endangered i.e. at extremely high risk of extinction in the wild. The Komodo dragon is only vulnerable though – a reason to be cheerful?!

Things are even worse for the Northern White Rhino. When Adams and Carwardine visited them, the good news story was that the population of these rhinos in the national park had grown from a low of 13 to 22. 25 years later, they are thought to be extinct in the wild, and in October 2014 one of the six rhinos in captivity died. Perhaps the most poignant change of all though is highlighted by the fact that the 2009 television follow up to ‘Last Chance to See’ did not even visit the Yangtze River Dolphin in China – it is now presumed extinct.

So how do we respond to the issues discussed by Adams and Carwardine, and the lack of positive news 25 years later? The authors address this themselves.

It captures well the need to think of future generations (though I wonder if we need to look more than one ahead to ensure long-term change), whilst also recognising that we can only do what’s in our power. For the people Adams and Carwardine met, it was the plight of their local wildlife. At the moment for me, it’s education – recognising that the impact of thousands of engaged, passionate and skilled graduates will be far greater than my own. What’s it for you?

I’ll follow the lead of the authors, and give Mark Carwardine the last word…

One thought on “25 years after the ‘Last chance to see’”

I write about how sustainable choices, powerful words and considered creativity can all knit together to form a life well lived.

Thinking of pulling up a seat, joining the conversation. It's been a while.
It's the first day of October and I'm wrapped up in wool, and chain drinking lemon and ginger tea. So it seemed only appropriate to say my farewell to summer over on the blog. A hark back to 30 degree heat, to a struggling garden, to a hummus-file Jordanian trip... A return to articles on climate grief, on how better kind of disposable coffee cup won't save us. And a film that is achingly sad in its message about transience, about beauty, and how seasons change. (Link in profile) - - - - - #seasonspoetry #papiermachethoughts #consiouscommunity #consciousconsumption #ethicalblogger #ecoblogger #alifeofintention #seekthesimplicity #untoldvisuals #aseasonalyear #embracingtheseasons #thisautumnlife #aseasonalshift
I ... am not ready. Feeling banished from the garden before I realised what was happening. I want to embrace Autumn. But Summer, we never had the chance to say goodbye. 📷 @timothy.kendal - - - - - #seasonspoetry #embracingtheseasons #botanicalpickmeup #mynaturestory #urbanjunglebloggers #awakethelight #gowildlyandslow #untoldvisuals #thisautumnlife #anatural_autumn
"Throughout the last decade I’ve increasingly kept my wardrobe afloat with second-hand wares – jeans from a clothes swap, a top from a charity shop, a friend’s handed-on jumper. And in general, I’ve been able to find what I needed. There have been occasions though, when I’ve picked up something new. A pair of brown brogues, after a nine-month search for second-hand proved unfruitful. A brilliant yellow mac as a birthday gift. There has been a pragmatism in these choices. But I also discovered something unexpected: a joy in wearing something newly, beautifully made." More on the joy of owning and wearing a few, carefully chosen and constructed, well and ethically made, items - including this beautiful yellow skirt from @amberoot_way - over on the blog (link in profile). 📷 @timothy.kendal #gifted #papiermachethoughts #consciouscommunity #consciousconsumption #ethicalfashion #ethicalblogger #ecoblogger #ethicalconsumer #alifeofintention #seekthesimplicity #untoldvisuals #ecofriendlyfashion #ethicallymade #sustainablefashion #fashionrevolution
A stop, a sit, a sofa | a book, a glass, a song list | thoughtful after a few days that twisted unexpectedly | a search and find for resilience | a way to serve and say yes to offers of service | a stop, a thought, a breath. Time to seek, deep. #startwithwhy #theartofslowliving #livethelittlethings #flashesofdelight #makersgonnamake #handsandhustle #nothingisordinary #calledtobecreative #creativityfound #seasonspoetry #littlestoriesofmylife #seekthesimplicity #awakethelight #exploretocreate #untoldvisuals #aslowmoment
We are coastal people at heart. So our move inland was a wrench on our maritime souls. We spent the next eighteen months talking, dreaming and searching for the right vessel to get us out on the river. And we’ve done it. At last. So here they are: my seven steps to getting out on the water. 1. Pine for the water. 2. Look on Freecycle for two kayaks. Fail. Because there’s some great stuff on Freecycle, but no one’s giving away free kayaks (paddles included). Gardening magazines, spare fabric, the occasional chair. Not kayaks. Steps 3-7 over, and what it felt like when we finally were on the water, over on the blog... - - - - - #papiermachethoughts #ethicalblogger #ecoblogger #consciouscommunity #consciousliving #alifeofintention #gowildlyandslow #thewildnesstonic #embracingtheseasons #littlestoriesofmylife #thalassophile #lifeoutside #microadventure